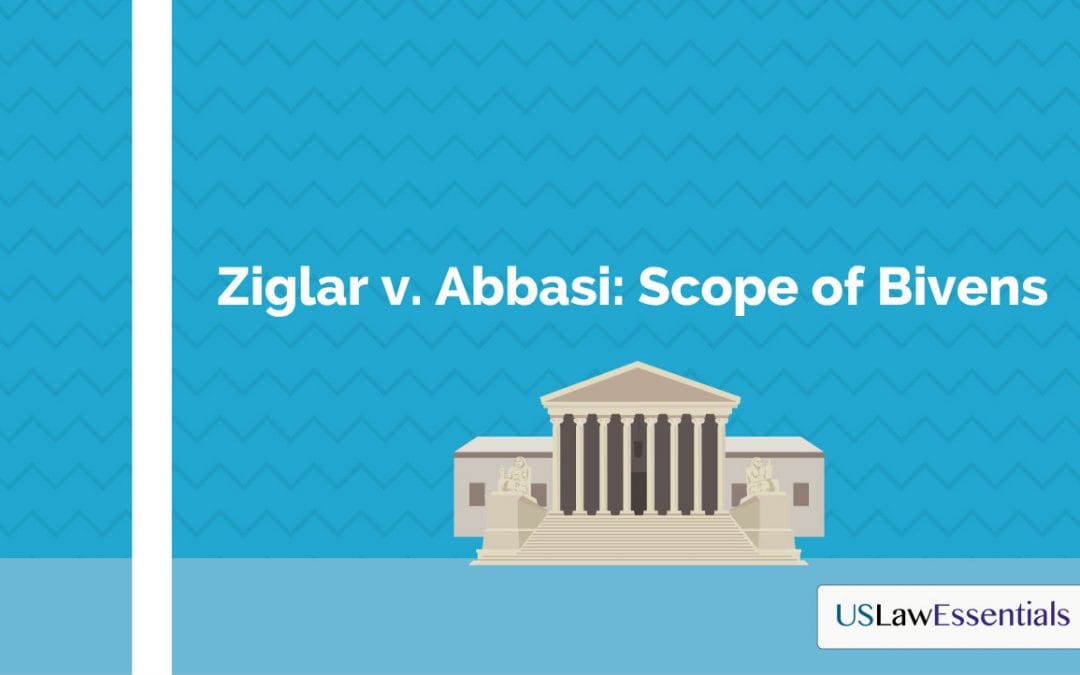 Holding that plaintiffs, former detainees of Guantanamo Bay,  could not bring a so-called Bivens action to sue senior government officials and wardens, the Supreme Court in Ziglar v Abbasi established factors that courts should apply when determining whether plaintiffs may sue federal officials for violations of constitutional rights.  In reaching its decision, the Supreme Court provides a helpful discussion of separation of powers.

What is a Bivens Action?

Bivens refers to a Supreme Court case, Bivens v. Six Unknown Named Agents, 403 U.S. 388 (1971), in which the Supreme Court held that plaintiff had an implied right to sue federal agents for violations of his Fourth Amendment rights to be free from unreasonable searches.

The right to sue was implied, because Congress and the Constitution did not expressly authorize a lawsuit against federal agents.  Through a statute, 42 USC Section 1983, Congress empowered plaintiffs to sue state officials who violate victims’ Constitutional rights, but there is no comparable statute that applies to federal officials.  Although there was no statute that authorized plaintiffs to sue federal officials, the Supreme Court held that this right was implied.

In two subsequent cases, the Supreme Court held that plaintiffs had an implied right to sue federal officials for violations of Constitutional rights.  In one case, a woman was allowed to sue under the Due Process Clause of the Fifth Amendment based on gender discrimination.   And in a second case, the estate of an inmate who died in a federal prison was allowed to sue under the Eighth Amendment. The Supreme Court held that the Claims in Ziglar v. Abbasi were Different from Prior Bivens Actions

The two factors that the Court should consider are:

The Supreme Court determined that Ziglar v. Abbasi was different from prior Bivens cases because plaintiffs were suing senior administration officials as liable for the actions of wardens who worked at Guantanamo Bay.  Moreover, the plaintiffs were suing to change aspects of US policy to detain persons accused of engaging in terrorism against the United States. There is therefore a balance to be struck, in situations like this one, between deterring consitutional violations and freeing high officials to make the lawful decisions necessary to protect the National in times of great peril.  The proper balance is for the Congress, not the Judiciary, to undertake.

Dissenting justices argued that the case should be allowed to proceed.  According to the dissenting justices, plaintiffs were suing to enforce Fifth Amendment and Fourth Amendment rights based on unconstitutional conditions of confinement that were similar to prior Bivens claims.  Because the claims in this case were sufficiently similar to prior cases, the majority improperly restricted the scope of Bivens actions by depriving these plaintiffs of their right to sue.