What is the connection between Ramos v Louisiana and abortion rights?

If the Supreme Court overturns Roe v. Wade, then states could vote to criminalize abortion.  As a result, women in those states would not be able to legally terminate their pregnancy. However, so long as abortion is considered a Constitutional right, states would not be allowed to criminalize abortion because of the Constitution’s Supremacy Clause.

Background: What did the Supreme Court Decide in Ramos v. Louisiana?

On the surface, Ramos v. Louisiana has no connection to abortion.  By a margin of 6-3, the Supreme Court held that the Sixth Amendment to the United States Constitution (as incorporated against the states by the 14th Amendment) requires unanimous jury verdicts to convict defendants in state court.  That is, a state cannot convict a defendant if one or two members of a jury vote “Not Guilty”.  All 12 jurors must vote to convict. The video below summarizes the case:

In reaching its decision in Ramos v. Louisiana, the Supreme Court rejected a decision in an earlier case from 1972 (Apodaca v. Oregon).  First, most of the Justices concluded that the 1972 decision was inconsistent with the Constitution because the framers of the Constitution intended for jury verdicts to be unanimous. Second, the law allowing non-unanimous verdicts had racist roots. As a result, a majority of Justices were comfortable departing from precedent in Apodaca.

In addition, the only reason why Apodaca allowed non-unanimous jury verdicts was because of one Justice’s opinion (Justice Powell) that the Sixth Amendment did not apply to the states.  And the Supreme Court has since rejected that Judge’s reasoning. As a result, some justices went so far as to say that Apodaca was not even precedent.

The reasoning above concerned three Justices who dissented from the decision in Ramos v. Louisiana. They argued that Apodaca had been established law since 1972 and lower courts and state courts followed this decision. For the Supreme Court today to suddenly depart from Apodaca suggested that the Supreme Court could depart at will from earlier decisions.  This would endanger our system of Stare Decisis.

Abortion rights advocates are particularly concerned because conservative Justices may now see this as an opportunity to overturn Roe v. Wade. They are probably most concerned with the reasoning of Justice Kavanaugh in his concurring opinion who proposed a three-part test to determine when the Supreme Court should reject precedent from an earlier case:

Judge Kavanaugh argued that the Apodaca decision should be overturned under all three tests.

Abortion rights advocates are concerned that conservative judges may view Roe v. Wade in the same way that Justice Kavanaugh and other Justices on the Supreme Court viewed Apodaca.  Following the reasoning of Ramos and Kavanaugh’s concurrence they might decide they should overrule Roe v. Wade and hold that abortion is not a Constitutional right. 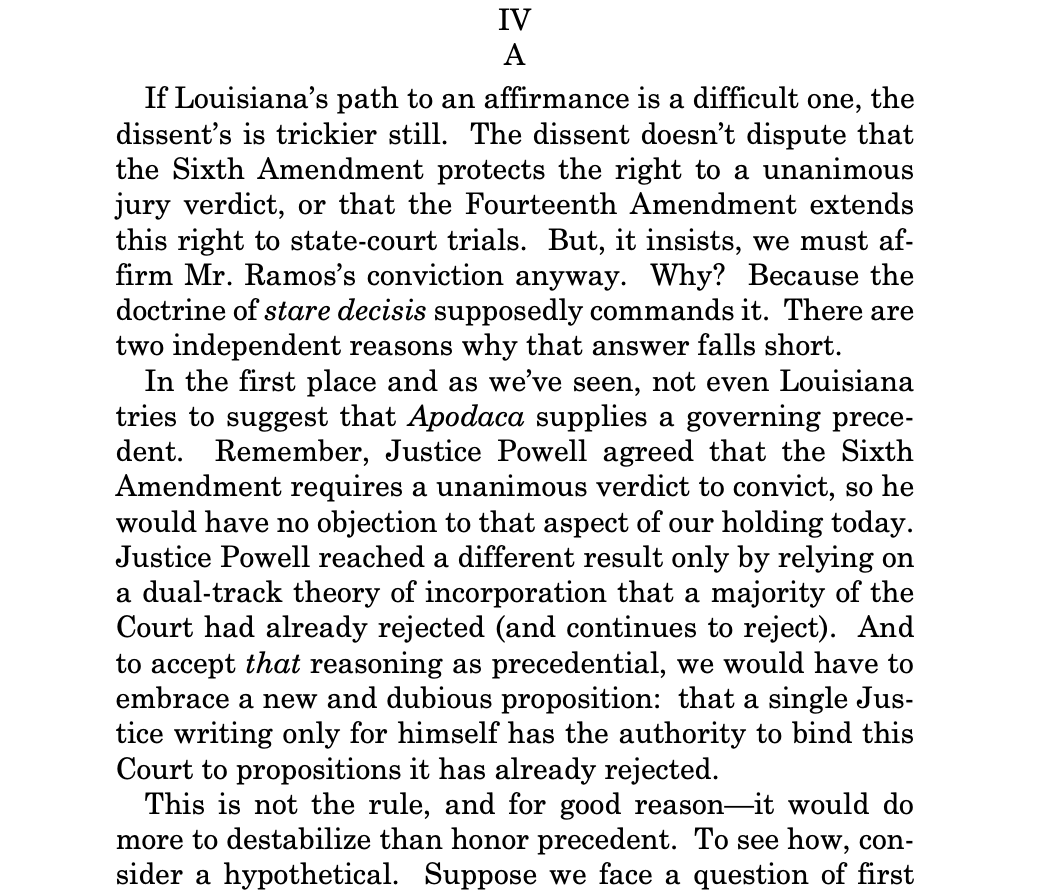